The Texas quail explosion is underway! Habitat plus rain equals quail. Four years ago, at the peak of a horrendous drought, Texas hunters experienced the worst quail hunting imaginable and literally stopped hunting. The Texas Parks & Wildlife Department’s harvest estimate was a paltry 141,00 quail, a mere six percent of the 2.36 million quail harvested in the boom year of 2002-03.

Things weren’t much better the following season. Then, as Perez described it, a decent year was followed by a good year, and now we have an exceptional year. The respectable harvest of roughly 950,000 quail last year will likely be shattered this season.

“We got a spring,” howled Perez, the long-time TPWD quail manager. “North Texas, the Rolling Plains, South Texas. Lots of moisture and bugs, low summer temperatures, perfect conditions. This is the year to come to Texas.”

Perez noted that the quail boom after the drought happened so quickly that last season many people didn’t have bird dogs, a situation that is being rectified on a daily basis across Texas quail country! Texas will be the 2016-’17 bobwhite epicenter but there are also some bright spots farther north.

Nebraska’s bobwhite numbers are currently at a 20-year high, and this year’s production looks fantastic, says Lusk. Whistle counts were way up this year and conditions were ideal for a bumper crop, particularly in the southeast and south-central regions.

Similarly, Bogenschutz predicts that bobwhite population numbers in Iowa could be the best seen in decades with a favorable nesting season.

In Kansas, Prendergast reports a 23 percent increase in bobwhite populations statewide. The Southern High Plains of southwest Kansas had the highest index, but populations were above the five and 10-year averages in all six of the main regions for quail.

Likewise, in Missouri, according to Dave Hoover, Missouri Conservation: “Statewide, 2015 quail numbers were twenty-nine percent above the ten-year average. The winter was relatively mild, and early nesting conditions in 2016 have been good.”

Oklahoma, coming off a major quail boom in 2015 in which statewide quail indices were 63 percent higher than 2014, didn’t experience as much favorable weather this year, said Kyle Johnson, Oklahoma Department of Wildlife Conservation. Conditions are good for quail in northeastern Colorado, Gorman reports, but be prepared to hunt in peripheral habitats due to the impacts of last year’s flooding in riparian areas.

The state quail coordinators in Florida, Tennessee, and Georgia all reported good conditions for bobwhite this spring, but the situation was dire in South Carolina, North Carolina, and Mississippi. 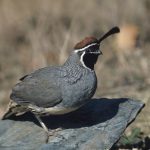